I used this line up for my preschool storytime and a Head Start Parent Training Session.

The Letters Are Lost Lisa Campbell Ernst, which is kind of a boring book, but I used it for a lot of audience participation and I could point out some of the beginning sounds to the kids. We sang and jumped to There's a Dog in School by Bill Wellington, it is always a hit with the kids. I like to use it because there were a lot of different animals in The Letters are Lost, and hey animals singing the alphabet is super weird and fun. As we sing, or bark, or neigh the alphabet, I have the kids jump with each letter to get them moving a little.

Then we read Chicka Chicka Boom Boom! by Bill Martin Jr. I put flannel letters up on the flannel board while we very slowly sang the alphabet. Then we sang it in a big daddy voice, a teeny tiny baby voice, and the grand finale was singing in a fish voice (rub forefinger up and down over your lips as you sing). Kids love it! At the Head Start visit one of the teachers had the parents participate in this verse, it was awesome!

I heard about adding poetry to storytimes in a poetry presentation by Jenna Gilles, a co-worker in our library system. Since then I've done a couple and am trying to add them more frequently. At the Head Start visit I added the poem My Snake from Something BIG Has Been Here by Jack Prelutsky. I had a string snake and gave each of the kids a string snake and talked about letter play to the parents. We made a few of the letters in the poem with the string snake. We only read one verse of the poem because the kiddos were super tiny 3's and weren't interested, I used it as a teachable moment for the parents about moving on when their kids aren't interested in listening.

So, we moved on to Z is for Moose by Kelly Bingham. I LOOOOOOVE, love, love this book. The emotion, the trauma, and the drama make it such a fun read aloud. The more over the top I am, the more the kids love the book.

We finished off storytime by making our names with block letters and markers, most boring "art" project ever, but it got each of the kids names on the wall. Having their names on the wall gives them a sense of ownership and belonging that I like to foster at storytime. 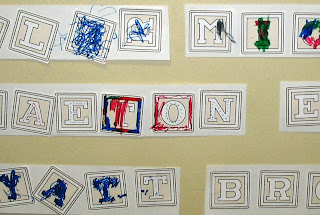 Posted by Unknown at 9:56 AM No comments:

Email ThisBlogThis!Share to TwitterShare to FacebookShare to Pinterest
Labels: Storytime

Most Rewarding Job EVER!

Best moment of the week (okay, probably month)! I was walking by the desk yesterday and I noticed a little boy from my Monday Storytime putting movies in the drop box. Monday had been his, and his dad's, first time at the library EVER! A little collaboration with the school got them in the door. Monday morning they did not have time to sign up for a library card, and on Wednesday, they were returning some movies they had checked out. So doing the math, they came back once to get the library card and then came back a THIRD time to return them and look for more stuff to get. While they were here, I could hear the dad talking to the little guy as they spent time together in the children's area. AWESOME!!!
Posted by Unknown at 10:42 AM 1 comment:

Email ThisBlogThis!Share to TwitterShare to FacebookShare to Pinterest
Labels: Reflections

I've been dreaming and scheming about this program ever since I heard Marge Loch-Wouters give a presentation for a 2012 Summer Reading Workshop in which she mentioned the 1000 Books Programs she has been involved with.


We had a kick-off party with Clifford as the drop in guest. I read a Clifford Book, Clifford stopped in for some pictures, then he left for a "nap" so the kids could have some milk and cookies. While the kids were snacking, I took the opportunity to talk to the parents about the 1000 Books Program and the importance of early-literacy activities for young children. Clifford came back after his "nap" and walked around the library and took some pictures with the kids. More than ten families attended and I had 12 kids signed up by the end of the morning! 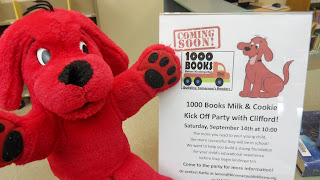 When the kids signed up, they received cute little bags provided by our Friends of the Library with our logo on them. In the bags are little folders with a log sheet and instructions for how to participate. 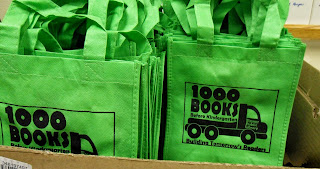 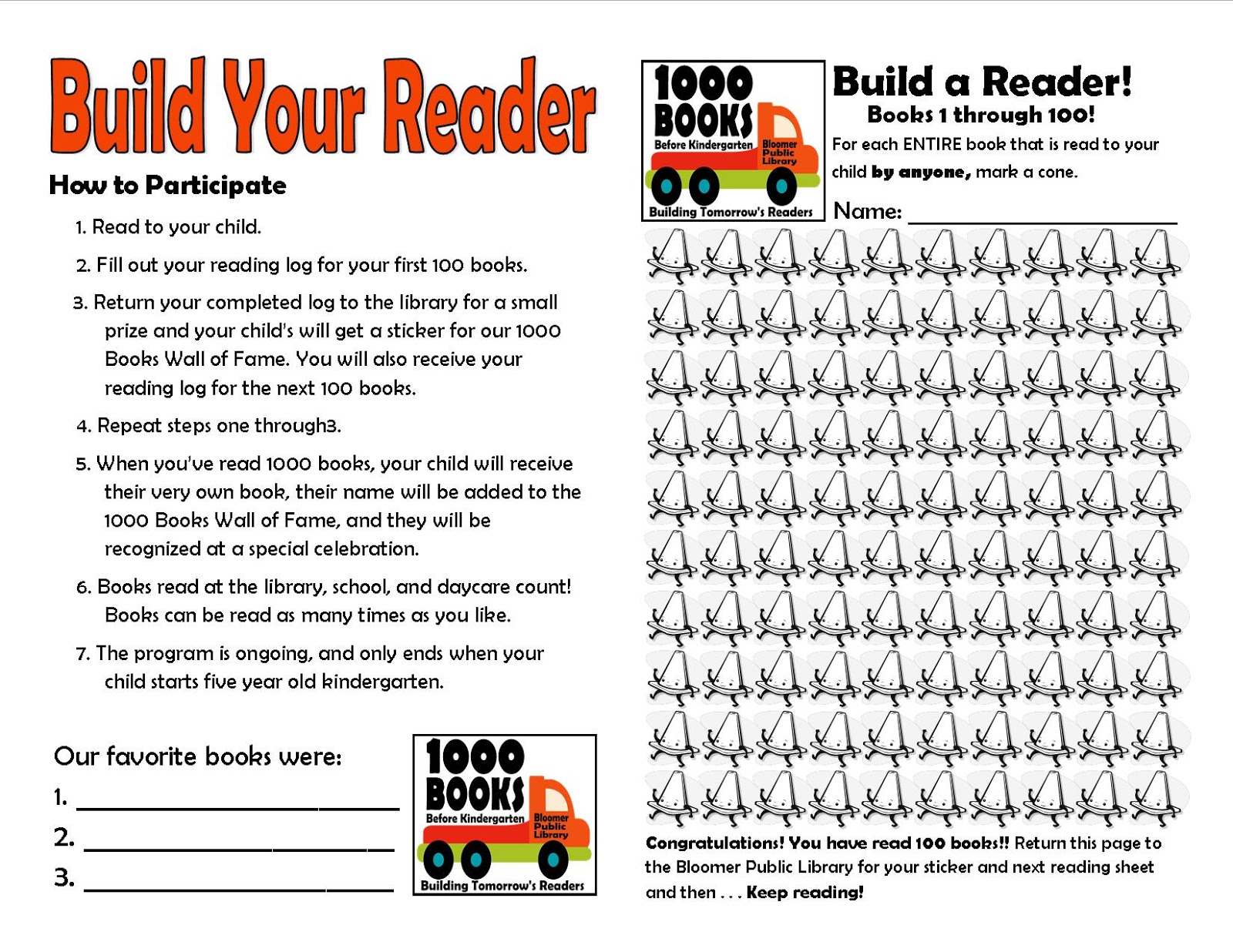 This also ties in nicely with our Picture Books Place arrangement of our picture books. After each 100 books read, the child will be able to put a window sticker on the building of their hundred books on our Wall of Fame. 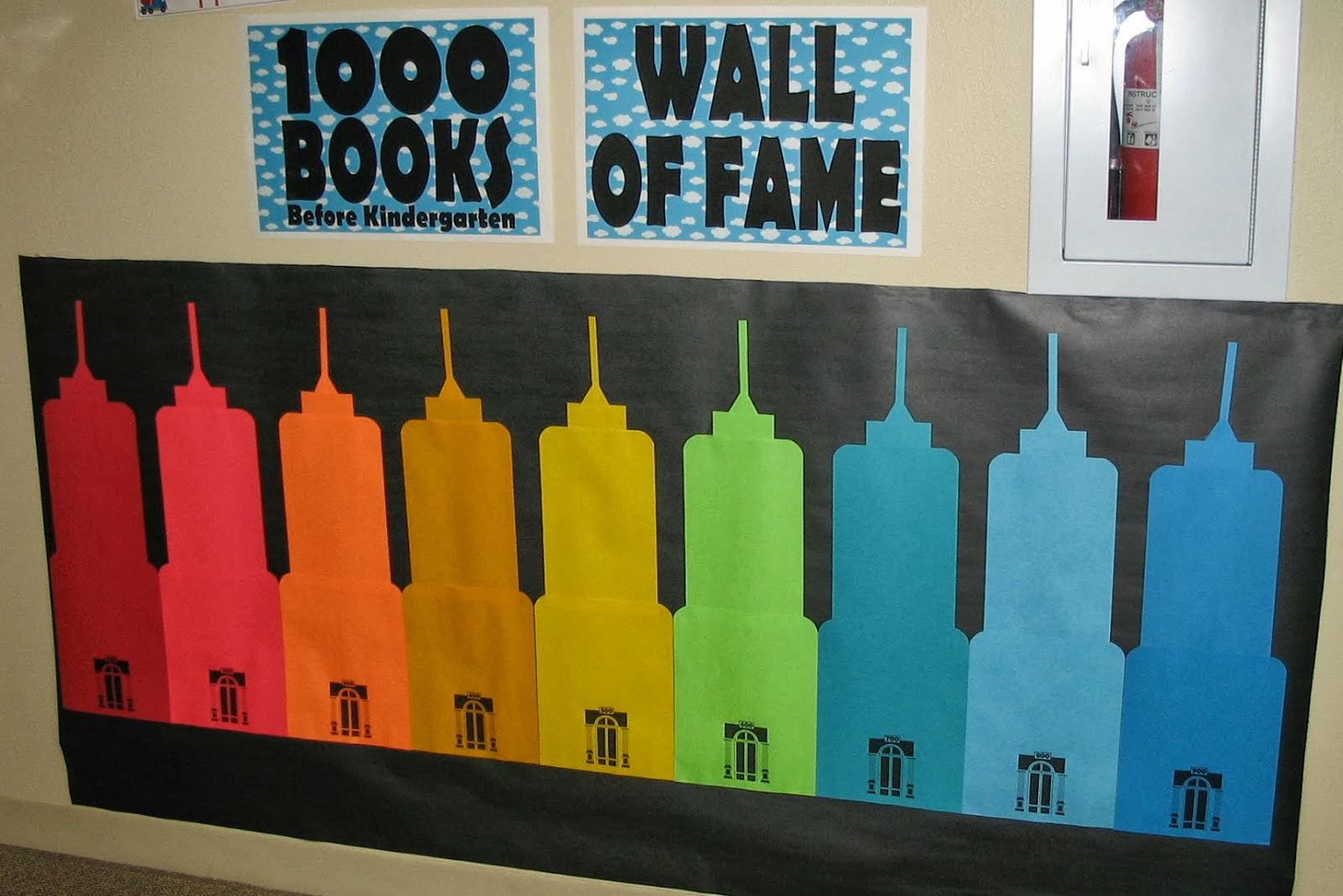 The address on the building corresponds with the number of books read. When the child reaches 1000 books, they get to put a star with their name on it on the boulevard below the buildings!

As part of our Building Tomorrow's Readers, I have added an early literacy activity station to the children's area of the library. This week/month the activity is making cookies with stickers in relation to the Milk and Cookie launch party with Clifford. 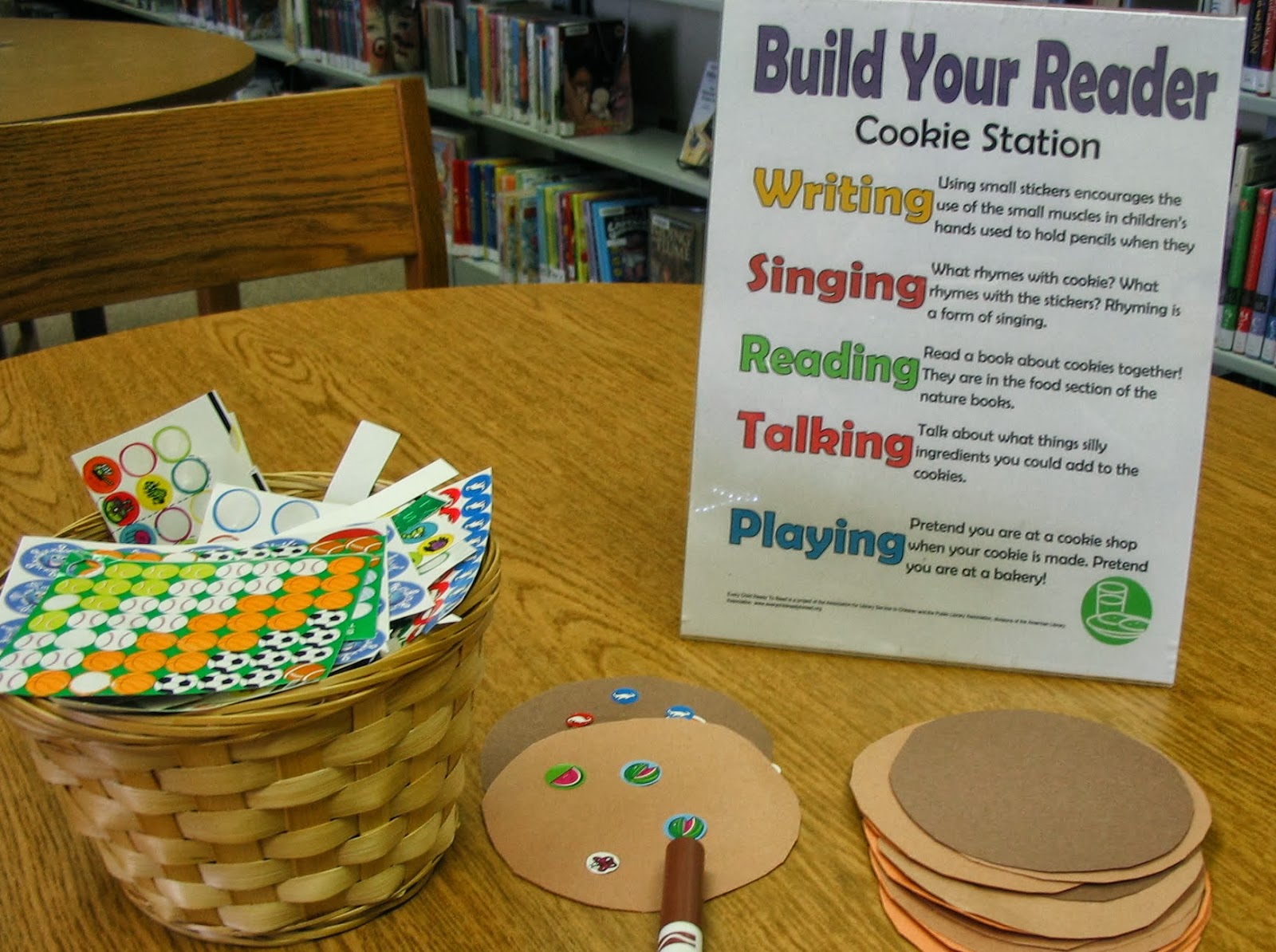 After this week's preschool and toddler storytime sessions, we are up to 24 registered kiddos!
Posted by Unknown at 7:03 AM 2 comments:

Email ThisBlogThis!Share to TwitterShare to FacebookShare to Pinterest
Labels: 1000 Books

Cookies on the table, milk in the fridge, rug out for a story, book propped up on my chair, sign up sheets ready to go, bags packed and ready for distribution, activity for parents and child out on the table, check, check, check. Our guest of honor. . . wait, WHERE THE HELL IS CLIFFORD?????

All I can hear is the clock, as I sit here waiting for the FED EX delivery of the Clifford costume that needs to be here in an hour, that was sent over-night due to a mix up at the costume supply place. Sweating much? Our 1000 Books Before Kindergarten Kick Off starts in a little over an hour and I am pumped up for our program to begin, but Yikes! What is the worse that could happen. . . Clifford missed his plane.

Back up plan? Yeah. . . It's not nearly as impressive, but I have a Clifford hand puppet....

Fed Ex, you have one more hour, then I'm sending the disappointed kiddos your way.
Posted by Unknown at 7:10 AM 2 comments: