Had to share my Pete the Cat bulletin board. We always have a calendar with our events, but our calendar needed some sprucing up this month so, I added Pete. Then I saw a post with
school jokes and added the jokes. 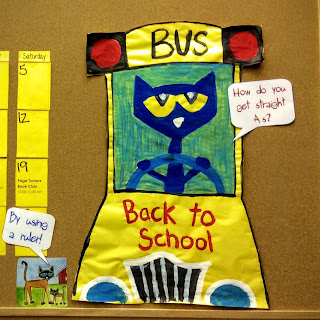 Posted by Unknown at 6:25 AM No comments:

First day back with the Homeschool Club today, and I had 27 kiddos (huge for our library).

Two years ago, I worked with a local co-op to establish goals and the purpose of the group.

1. Get kids used to public speaking.
2. Give kids opportunities to work in groups (who aren't siblings).
3. Kids work with a different adult.

We have been meeting during the school year once a month for an hour.

We started with a getting to know you game: on the way into the meeting room, kids were given toilet paper and told, "Take as much as you think you will need."  That was it, no further instructions. After all the kids had their toilet paper, I took 4 squares myself and started off by touching each square one at a time as I made statements:
1. My name is Kathy.
2. I work at the library.
3. I like to watch mysteries on TV.
4. I like to play volleyball.

One of the older kids had already played the game before, he had taken 6 squares and wanted to go next. After he went, I had the kids guess what the toilet paper was for before we had everyone else go. When some stragglers came in, the kids went wild suggesting the late comers take a lot or a little (got a little loud for a moment).

The kids all cooperated beautifully, even the kid who took 37 squares!

For each kid the first square was to say their name, and I would have the group repeat the name back to me. If they stopped listening, I would just ask them the last thing the kid said, "Did anyone hear what restaurant John likes to visit?" Occasionally I had to prompt kids, what do you like to do outside, what's your favorite color, etc,. This game took A LOT longer than I had anticipated, we were left with about 20  minutes. 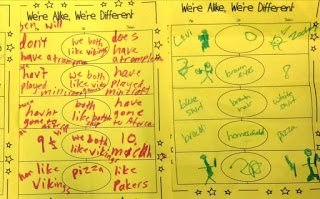 We finished with the same and different game. The kids had to find 5 other kiddos and write something they had in common in the circle, and something that was different outside the bubble. The younger kids had a harder time with this activity (4 & 5 year olds) because they couldn't write/spell or were reluctant to do so, but between myself and some of the older kids, we got their sheets completed for them. This was great for working on initiating a conversation with people, you wouldn't believe how hard this is for kids. I had the opportunity to model for them A LOT! Incentive to finish the sheet: they could go when it was full. 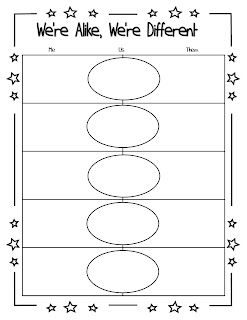 Posted by Unknown at 7:32 AM No comments: