Valentine's Minute to Win It

I had originally set out to have a regular non-themed Minute to Win it, but when I was looking around Pinterest for some ideas to get started for my party, I found a Valentine’s Minute to Win It post by Sassy Sites and loved the idea. I used several of the games they had used: the Heart a Stack, a game they called Heart Pick Up but I renamed it Heart Transplant (because I love a good play on words for kids),  Cookie Face (which I have done in the past) and Candy Corn stick up. I found another cookie game called Unicorn Horn at the Teaching Reef . I looked online for stopwatches and found a real Minute To Win It timer on YouTube. This was awesome! The kids LOVED helping countdown to the start and the finish!
We started out with Heart a Stack. I gave each kid 15 conversation hearts and a plate. The kids had one minute to stack their hearts and at the end I counted how many were left standing. Many of them were finished stacking in less than a minute (but I kept the number at 15 hearts, I didn't want them to get sick later).
The kids did Heart Transplant 1 in which the kids had to transfer the hearts from the table to their plate using chopsticks (we used Valentine’s pencils that they got to keep). Then I passed out straws for Heart Transplant 2 and the kids had to use the straw to suck up the heart and move it to the plate. Both heart transplants were scored by the number of hearts they had transferred from the table to the plate in one minute. 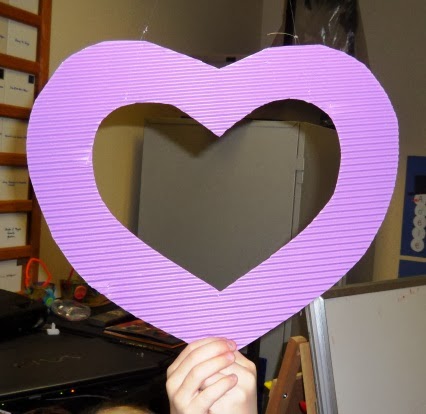 We re-used the straw for their FAVORITE game called Cupid’s Arrow that I had found somewhere on line (I have no idea where) and tweaked a bit so they could shoot their “arrows” through hanging heart shapes. There was one kid to hold the heart so it didn't turn, one who was the cupid and the next two in line were the judges counting the arrows that went through the heart. It worked out great because I had four kids counting! The number of arrows was added to the tally.
Next the kids played Unicorn Horn with cookies. I had three people holding a plate of ten cookies. Then three kids had a minute to stack as many as they could on their forehead. This time I let them count their highest tower to add to their score. The highest unicorn horn was 9 cookies high! (we reused the cookies for each kid and I let them pick out 2 fresh cookies to eat, but they had to save one for the next game). The next game was Cookie Face this was a do or die game. They put a cookie on their forehead and had to get it into their mouth without using their hands. They got a new cookie to eat if theirs had dropped on the ground.
They also played Candy Corn Stick Up, which was sort of lame. They all had to line up 20 Valentine colored candy corns around their paper plates in a circle. We did one last challenge, the Love Chain. This one was who could make the longest paper chain in a minute.
A lot of the kids were getting picked up at this point (I had more activities planned) so I gave them all a couple of the left over cookies and tabulated up scores. The top three kids got a one dollar little box of Valentine's chocolates and they all had pencils to take home (not to mention the cookies and candy). There was a tie for third so I used one of the challenges we hadn’t gotten to as a tie breaker. The Broken Heart – it was just a puzzle I made (cutting out four pieces of paper on top of each other so they were all the same).

I tried to reuse stuff in different challenges as much as possible to keep the flow moving and the cost down. I ended up spending $30 dollars on supplies at Walmart for this party (I probably didn't have to buy the pencils, the Q-tips or the straws, but I found pink Q-tips and red and purple straws and just HAD to get them!) Overall I had 22 kids and one adult that I shanghaied into helping out attend this program!
Posted by Unknown at 8:26 AM 1 comment:

Parachute Play on a Winter's Day

We started by laying the parachute out on the floor. I had everyone stand around the parachute by a handle. We started with an opening idea I got from the blog So Tomorrow . I added some verses to extend the song and we ended up singing it twice.

Tune of We Wish You a Merry Christmas:

I turned on Jim Gill's My Ups and Downs from Jim Gill Sings Do, Re Mi. We followed along with the song putting the parachute up and down.

We had a Cotton Ball Snowstorm, which was FABULOUS. One mom asked me if she was supposed to be having so much fun! Yes! Mom's can have fun, too. I dumped a bag of large cotton balls out on the parachute. We ended up playing the snowstorm for quite awhile, as the kids were asking for more, more. 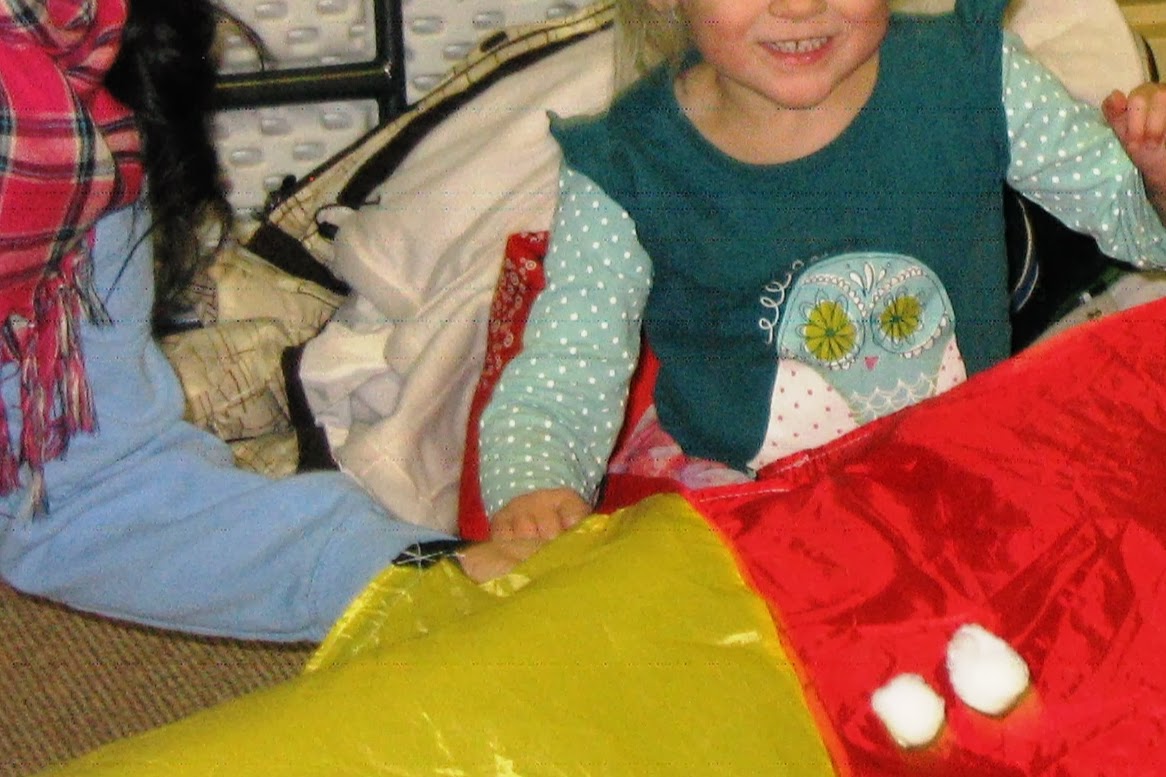 Our next activity was a game I found on the Rhythm Express blog.

I turned on Greg and Steve's The Freeze and they loved having the free will to interact with the parachute at their own pace.

The next song was from Preschool Education Games to the tune of If You're Happy and You Know It. I added some silly activities of my own.

We took a few minutes and the adults held the parachute up while the children danced around underneath to some random music.

We had one last snowstorm, then it was time to say goodbye.

I close my storytimes with this is the way we say goodbye, so I tweaked it to include some parachute actions.

What Does the Fox Read? 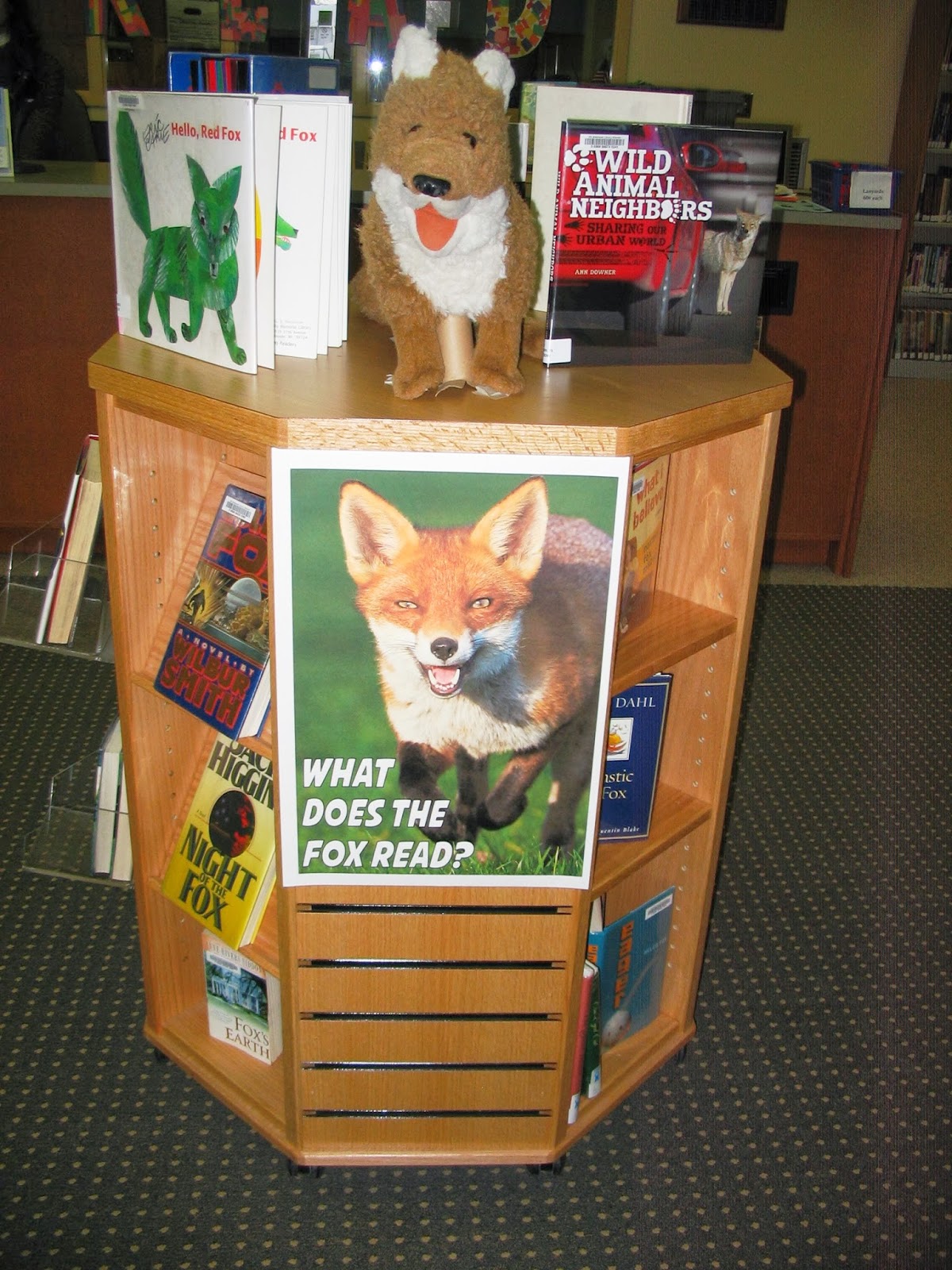 Posted by Unknown at 8:58 AM No comments: